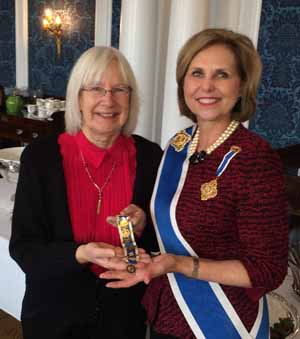 “Emblems are quite essential to all well-organized bodies and should be suggestive of the organization they represent,” Fannie S. Ketterman wrote in an article titled “Our Insignia,” which appeared in the February 1913 issue of The American Monthly Magazine. The article explains, “Soon after the organization of the National Society Daughters of the American Revolution, a committee of three Honorary Vice Presidents was appointed to design something characteristic.”

Numerous design submissions were rejected before the winning suggestion came from an unlikely source: Dr. G. Brown Goode, a museum administrator for the Smithsonian Institution and a zoologist specializing in the study of fish. He was also the husband of Sarah E. Goode, one of three members of the committee charged with designing an insignia for the Society. Dr. Goode proposed that the Daughters base the insignia design on the spinning wheel motif that had already been adopted as the Society’s official seal. After refining his initial sketch based on feedback from DAR members, who found the spinning wheel too reminiscent of a ship’s wheel and the distaff too cannon-like in appearance, Dr. Goode’s second draft was met with approval.

Dr. Goode’s design, now familiar to Daughters worldwide, was inspired by a spinning wheel that belonged to his grandmother, Rebecca Hayes Goode of Amelia County, Va., and which was later donated to the DAR Museum. The emblem features a wheel with 13 spokes projecting from the hub toward a rim encircled by the words “Daughters of the American Revolution.” Thirteen stars line the outer edge of the rim, and a distaff filled with flax rests under the wheel. The design was unanimously adopted by the National Board of Management on May 26, 1891, and patented September 22, 1891.

In Ms. Ketterman’s description, the spinning wheel emblem, “is a photograph of Colonial days, vividly portraying the sterling qualities of the Colonial Dames, industry, thrift and patience, and of their wonderful ingenuity and proficiency in the art of weaving. … The 13 spokes and 13 stars represent the 13 states’ unity, so our emblem is a most happy blending of industry and unity; of the practical and mythical; of prose and poetry; and may it ever be an impetus to us to weave greater deeds of patriotism and acts of loyalty.” 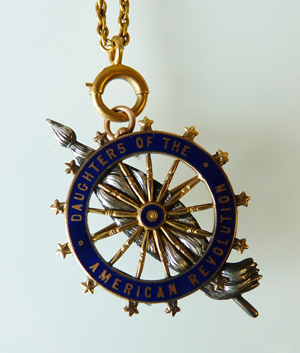 At the Eighth Continental Congress in 1899, Ellenore Dutcher of Nebraska proposed the adoption of an official emblem of suitable size for daily use. This proposal resulted in the creation of the DAR Insignia pin, which each member may purchase upon admission. At the 10th Continental Congress in 1901, the Insignia pin was adopted as the official emblem for daily use. It is to be worn over the left breast in accordance with the guidelines set forth in the DAR Handbook and National Bylaws. Each pin is engraved with the owner’s unique membership number—the lower the number, the older the pin.

After reading last year about New Jersey Daughter Nancy Kritch’s generous donation of Insignia #9, which she found on eBay, Virginia Member-at-Large Joanna Miller contacted the Office of Development to say she had Insignia #1, which belonged to DAR Founder Eugenia Washington. Ms. Miller inherited Insignia #1 from her mother, who was regent of Eugenia Washington Chapter when it disbanded.

On February 6, 2015, at a luncheon with the Executive Committee, Ms. Miller announced her intention to donate Insignia #1 to the NSDAR Archives, allowing this historic treasure to come home to NSDAR Headquarters in time for the National Society’s 125th Anniversary. President General Lynn Young, awed by the opportunity to see and touch something that had been worn by one of the Four Founders, gratefully accepted the donation on behalf of the National Society.

It’s impossible to know what other treasured pieces of NSDAR history are held in private collections. If you own an item that is of historic significance to the National Society, please consider donating it to NSDAR during our quasquicentennial year to ensure that it will be cared for and preserved for future generations of Daughters to enjoy.

In one click, you will find all the information you are interested in about DAR JEWELRY EBAY. We have collected the most complete and diverse information for you.

The DAR Store is continuing to take and fulfill orders, but customers may experience a delay in shipment due to DAR Headquarters closures related to Coronavirus (COVID-19).

The DAR Museum Shop is continuing to take and fulfill orders, but customers may experience a delay in shipment due to DAR Headquarters closures related to Coronavirus (COVID-19).

Pins - Daughters of the American Revolution

The DAR Museum Shop is continuing to take and fulfill orders, but customers may experience a delay in shipment due to DAR Headquarters closures related to Coronavirus (COVID-19).

The DAR Insignia Store is continuing to take and fulfill orders, but customers may experience a delay in shipment due to COVID-19 restrictions.

The DAR Insignia Store, DAR Store, and DAR Museum Shop are continuing to take and fulfill orders, but customers may experience a delay in shipment due to DAR Headquarters closures related to …

Pin Keeper storage case for DAR, 1812 and other lineage society pins, jewelry or cosmetics (bag only - pins not included!) FaysTreasures. 5 out of 5 stars. (6) $85.00 FREE shipping.

You've looked at the most informative DAR JEWELRY EBAY links. On our site you can also find a lot of other information related to jewelry.

Searching for Caldwell Jeweler Dar Pins information? Follow the links below to find all the information you need and more.

From 1892 until 2010 J. E. Caldwell was the official jeweler for the DAR, producing insignia pins, officer pins, and numerous other pins for DAR members. The donated records date from the mid-1890s to the early 1910s, which gives us an early glimpse of the company’s association with the DAR.

Find many great new & used options and get the best deals for DAR Daughters Of The American Revolution Pin Caldwell 10K Gold & Gold Filled at the best online prices at …End date: Nov 08, 2020

The DAR Insignia Store is now open with a limited inventory of in-stock pins! The fulfillment time for engraved pins is currently at a 6-8 week minimum. Orders for engraved pins received after November 1st are not guaranteed to arrive by December 25th.

Pins - Daughters of the American Revolution

The DAR Insignia Store is now open with a limited inventory of in-stock pins! The fulfillment time for engraved pins is currently at a 6-8 week minimum. Orders for engraved pins received after November 1st are not guaranteed to arrive by December 25th. Click here for more details.

The DAR Insignia Store is now open with a limited inventory of in-stock pins! The fulfillment time for engraved pins is currently at a 6-8 week minimum. Orders for engraved pins received after November 1st are not guaranteed to arrive by December 25th.

Originally founded in 1912, Hamilton Jewelers has been a leader in the industry, best recognized for outstanding service, value, and quality. The Official Jeweler to Daughters of the American Revolution (DAR), and many other fine ancestral organizations, Hamilton is proud to provide insignia jewelry, business gifts, service awards, and more to ...

We hope that you have found all the necessary information about Caldwell Jeweler Dar Pins using the links above.

Seller:lovethosebostons✉️(686)0%, Location:Erie, Pennsylvania, Ships to: US & many other countries, Item:253481595503Antique DAR Daughters Of The American Revolution Pin Diamond Insignia Pin 14K. This is a stunning older DAR piece. It is marked 14K. The center is a diamond. The number on the back reads (to the best of my ability) 501879 There is another marking which I believe reads JEC . New DAR pins are being sold through Hamilton at a price of $1,800 Don't miss out on this gorgeous collectible at a great price!! I describe items to the best of my ability. Items are sold as is, no returns. Thank you.Condition:Used, All returns accepted:ReturnsNotAccepted, Country/Region of Manufacture:United States

The Jane Bain Alliance Chapter of the National Society of the Daughters of the American Revolution met Saturday, October 19, 2019 at the Alliance Country Club. Vice Regent, Joyce Kuss, opened the meeting with the society’s ritual and Pledge of Allegiance. Michal Barrett gave the invocation.

Regent, Theresa Deprill, read the message from the President General reminding members to wear the color purple on Thursday, October 24, 2019 in recognition of Domestic Violence Awareness month. Members were encouraged to wear red every Friday all year to honor deployed service men and women.

In chapter news, a check for $150.00 was presented to the SAM Veterans Center from the chapter which was received from donations of the quilt auction at the Constitution Luncheon. Member, Deb Hughes, circulated photos of quilts being presented to veterans at the SAM Center. World War II US Navy Veteran Glenn Smith (95 years) and POW Korean War Veteran, Sgt. Vernon Judd received Quilts of Love. Member, Yvette Graham, was awarded a certificate of Medal of Appreciation for her efforts in assisting her cousin in obtaining membership to SAR. Member, Dianna Fugate reminded members she is collecting clothing donations for Crossnore School after the meeting. Fugate also read a thank you from Crossnore School thanking the chapter for their support of the school.

Hughes presented the program "NSDAR Insignia and Pins." She began with history of the insignia and the do’s and don’ts of wearing of the pins. The insignia represents a spinning wheel and the white gold distaff represents flax. The society’s name on the blue rim is surrounded by 13 stars which represents the 13 original colonies. The insignia was adopted by the society in 1891, one year after the NSDAR was founded. The insignia pin is to be worn on an official DAR ribbon placed on the left shoulder with pin on the bottom corner closest to the heart.

Hughes reported there is a dress code for wearing pins and members are to be respectful of placement of pins in the order directed by the Society. A member can only wear a pin if she earned that particular pin. Commemorative pins may be worn on the right shoulder. Ribbons and pins are to be worn only to meetings and DAR functions not in public.

To inform members of pins available, Hughes gave a hand out listing pins in the order to be worn. To assist members in the task of how to place pins in the proper order, she made a fun game of pin bingo. Members were asked to place cut outs of "pins" on a paper ribbon in the correct order as established by the Society.

Hughes stated the official DAR pin supplier is Hamilton Insignia but can also be purchased on Etsy, EBay and the DAR store.

The next meeting is November 16, 2019 at 10 am at the Alliance Country Club. The speaker, Charlotte Cross, will present "Women Mentoring Women". If you are interested in attending a meeting, contact us on Facebook @ Daughters of the American Revolution Jane Bain Alliance, OH Chapter. If you would like more information about The NSDAR visit DAR.org.

Sours: https://www.the-review.com/news/20191104/jane-bain-dar-learns-about-dar-pins-and-insignia
Thrift Store Flipping on eBay (How much do CUPS/Mugs sell for?!)