The King of Fighters 2002: Challenge to Ultimate Battle

"The system 3-on-3 is back, expanding the battle on who will be the next competitor! Sevenfearsomefigures from King of Fighters '96to'98 take part in the fights! This year, the dream fight is guaranteed to heat up! The Dream Match is happening again. BE THE FIGHTER!"

It was later released for the Dreamcast, this time adding two characters absent from the original version, King and Shingo Yabuki. The PlayStation 2 version included Orochi Iori, Goenitz and Geese Howard.

The game brings back the team play composed by three characters each that was a tradition in previous games. The game has also several important changes in the gameplay, like the "Free Cancel System" or "Max Mode System", the "Quick Emergency Evasion" and "Quick MAX Mode Activation", aside from the countless changes in each character's special moves and their properties.

Max Mode compared to the previous games, while it enables Free Cancels (which use up a set duration of the mode), now halves the damage done at a cost for its duration. Normal DM's now no longer use up an extra gauge stock when performed, and now only instantly end Max Mode. SDM's instead use one extra stock while also ending Max Mode as well.

One of the most notable changes is the inclusion of MAX2 Desperation Moves (also known as Hidden Super Desperation Moves), which are DM's that can be used only with 3 stocks and at a certain threshold of low HP.

Another notable changes are the allocations of both normal DM's and SDM's, as not all normal DM's have SDM versions and some SDM inputs may be completely different attacks depending on the character(s). Nearly all SDM commands end with 2 of the respective buttons for their inputs (A+C or B+D) due to the fact that Normal DM's can be used in Max Mode.

The roster consists of many key characters who were playable throughout the NESTS Chronicles Saga. Along with, certain Teams are represented by a prior game; for example, the K' Team (K', Maxima and Whip) are called the "KOF '99 Team", with its members debuting in The King of Fighters '99 representing that game. Additionally, characters who were not present in the NESTS Chronicles Saga appear in this game, such as the '97 Special Team (representing KOF '97) and the New Faces Team (representing KOF '98).

The only character added to the roster is:

Following the conclusion to their latest King of Fighters saga (The NEST Chapter, comprising KoF '99-2001), SNK (with the help of EOLITH Co.) once again released a "dream match" King of Fighters game as the 2002 tournament. As usual, a "dream match" meant that the roster could be drawn from any era of King of Fighters regardless of what the storyline was presently. As such, KoF 2002 saw the return of the characters from the Orochi saga such as Yashiro and Vice (and the game's final boss was Omega Rugal). Joining them were characters featured in the NEST saga such as Angel and May Lee. As for the gameplay, the "Striker" assist system was removed in this game so the fights returned to the traditional 3-on-3 team system. 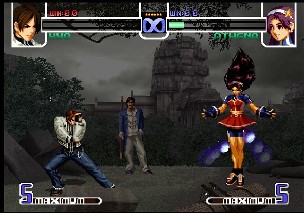 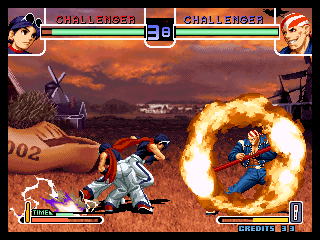 All combos listed in the character sections are considered bread and butter, the most damaging, efficient combos (some are still quite challenging though).

All sections are still under construction. Credit goes to Kao Megura for the move names.

The King of Fighters 2002: Challenge to Ultimate Battle is a fighting game developed by Eolith and published by Playmore in October 10, 2002, initially for the Neo-Geo MVS arcades. Which was later ported to Neo-Geo AES, Dreamcast, PlayStation 2, Xbox, Microsoft Windows (either Steam or GOG.com), Nintendo Switch, PlayStation 4 & Xbox One.

It is the ninth installment in the main series and the second as a dream match (like KOF98), meaning that the game does not have a plot and only gathers the best from all previous games.

The game is best known for most of the YouTube videos being in either Spanish, Portuguese or even Simplified Chinese. Even more than English.

WARNING: Do not include any kind of "feature" from hacked versions like Magic Plus II, 10th Anniversary or Super 2004. This article will only cover the legal ("pure") version of the game.

Gameplay screenshot showcasing a match between Angel and Maxima.

During MAX Activation, the player's offensive and defensive strength is increased for a short period and can cancel any attack into another player. In this state, a Super Special Move can be used without consuming a Power Gauge stock. There are also MAX Super Special Moves, which are Super moves that can only be performed during MAX Activation with one Power Gauge stock, and MAX2 moves that require two stocks while low on health.

Main article: List of The King of Fighters characters

The Unlimited Match version of the game was released on February 26, 2009 for the PlayStation 2 in Japan and on November 3, 2010 for Xbox Live Arcade. The game was later ported to Steam on February 27, 2015, and a PlayStation 4 version was released digitally on February 8, 2021. A physical release is set for late Spring 2021. Beside new stages and artwork, the game also includes additional characters as well as changes to the team roster, with the number of default teams increased to 18, counting both the regular and alternate versions of the Orochi Team. Moreover, all of the characters featured in the series between The King of Fighters '99 and The King of Fighters 2002 are included with the exception of K9999, which is a character conceived as a pastiche of Tetsuo Shima from the manga Akira. Instead, a new character called Nameless (ネームレス) was designed to take his place in the game and features most of K9999's special techniques with an added touch. In November 2020, the Steam version of the game was updated with rollback netcode, allowing for higher quality online play. The PlayStation 4 version was released with this same rollback netcode.

During its release week, the game sold 19,000 copies in Japan.[5] In Issue 114 from Arcadia, the game was featured at ninth in its Top Ten Video Games list.[6] Critical reception to the game was positive due to its large number of playable characters, although mixed opinions were given to its aging graphics.[7][8] In addition, despite lacking a plot, the large interaction between characters was praised for adding depth to the game.[9] The game has generally been considered one of the most popular games in the franchise in Latin America.[10][11]

Own the dash meaning